We are naturally concerned and often focus our attention on the “look” of the outcome of a project, but what is even more important than your “look” is what is underneath the “look”.   We are currently installing a Vapor Barrier for one our clients and the article below was written by Jason Spangler with Wagner Meters explains the reasoning behind this very necessary step.

Anyone that has had to face a moisture problem with a concrete slab understands the damage that excess moisture can cause. Moisture in concrete can occur from a variety of sources: ground moisture that contacts the slab through either capillary action or as water vapor, high air humidity or drastic changes in relative humidity in its environment, leaking plumbing that passes through the slab, and more.

Excess moisture can cause pH changes in concrete that adversely affect adhesives. Even an excess of moisture that was retained from the original concrete mixture will cause problems if the slab was sealed prematurely.

It should be obvious – concrete starts wet. The water added to the cement, sand and aggregate mixture is necessary to form a good bond in the concrete, but it is also necessary that the moisture evaporates away from the concrete in order to let the concrete dry and to prevent flooring failures.

Adding more water may make concrete more workable but it also means the drying time can increase to unreasonable levels as the rate of evaporation is dependent on a number of variables.

While moisture can be added to the slab through a number of different sources, it can only evaporate away via the slab’s surface. It often can’t escape the slab without remediating treatment. Simply put, a concrete slab in contact with moisture cannot be brought to constant “dry” conditions. Something has to stop the migration of moisture into the slab.

The preventative measure most often used to try to circumvent these contact moisture-related challenges is to install a vapor barrier. But what type and where it should be installed has been a subject of much debate. Some feel that vapor barriers contribute to curling in the slab and that simply casting on a granular slab should be sufficient. Others feel a vapor barrier is a critical element to protecting from flooring or adhesive failures, and even some environmental issues, as vapor barriers can prevent moisture-related mold and mildew growth or even block certain gasses that can pose a health risk if they accumulate in a home or business.

Technically, any material that resists moisture passage is a vapor barrier, a term often used interchangeably with a vapor retarder. But very few are true barriers as they still have a low level of permeance, or the ability to let water vapor pass through. This is often expressed as “perms” that allow for categories of permeability. The degree of permeability that is acceptable may depend on the application – for example, a water vapor permeance less than 0.3 perms is generally recommended but for residential use, a higher permeance rate is considered acceptable. What seems to be crucial is that the vapor barrier or retarder under the slab must have a lower degree of permeance than the flooring or floor covering above the slab. Otherwise, the potential for a moisture imbalance can still cause flooring failures over time. ASTM International gives specific guidelines in ASTM E1745-09 and ASTM E1643 for the use, installation, and inspection of vapor barriers used under concrete slabs. 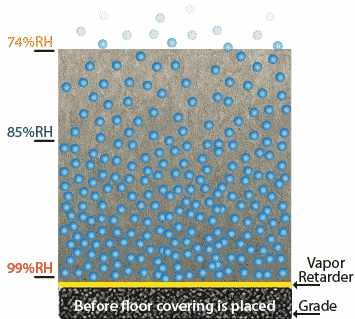 Currently, a vapor barrier is typically applied over a layer of granular fill to try to minimize the wicking effect of ground moisture. Of course, if the vapor retarder is penetrated, it will not be effective in preventing moisture migration. Seams must be properly sealed, heavy grade materials must be used where traffic may cause a penetration, and the lowest possible grade of permeance should be used. The concrete slab is then poured directly over the vapor barrier. (This was not always the case. Prior to the 2000s, a “blotter” layer was recommended between the vapor barrier and the slab. But this practice changed as the difficulties of keeping the blotter layer moisture-free became evident.)

It must be noted that this practice, though, causes slower drying times because moisture cannot leave a drying slab through an impermeable sub-layer. With the vapor barrier directly under the slab, moisture then has to move to the surface of the slab and evaporate from there. Placing the vapor barrier under the granular layer let contractors float the concrete sooner and appeared to dry the concrete more quickly because the base accepted some of the water from the original concrete mixture (and, some argue, create more potential for water reserves that could then absorb back into the slab to create adverse conditions).

Because there are pros and cons to both situations, accurate relative humidity testing is also necessary to be sure slab moisture conditions are ready for the flooring or finish application of choice. Moisture-sensitive adhesives and applications can be just as adversely affected by a moisture level too high in the slab as they can by moisture-wicking problems due to an inadequate vapor barrier. Relative humidity testing can give an accurate picture of what the final result of a sealed concrete slab will be when it is fully equilibrated.

There still may be situations where a vapor barrier is necessary over a concrete slab. Even when a slab is dry enough for the recommended use, it is still possible for moisture to migrate from the slab into porous or absorbent flooring materials like wood. The danger is that the wood will swell and crack as moisture moves in and out, and that adhesives will also fail from the changing moisture levels. In these situations, a second vapor barrier is often recommended between the flooring and the concrete subfloor.

BACK TO MEDIA CENTER